It’s no secret — we are into dinosaurs in a major way.

If you think dinosaurs are extinct, you haven’t seen Jackson’s room. They’re everywhere — on the the bed, on the walls, on the furniture, on the built-ins and ALWAYS strewn on the floor.

His love of dinos — and my love for him — inspired this latest painting project.

You may have seen old advertising collectibles from the Sinclair Oil Co. Their mascot was a dinosaur, an apatosaurus, I’m told by my resident expert. (I’m guessing they called it a brontosaurus back in the day…)

After working on my Coca-Cola chair and my Betsy Ross flag chair, I decided I wanted to paint a piece of furniture inspired by the Sinclair dinosaur. This stool and child’s chair provided the perfect canvas. And I decided to make this my first attempt at painting with milk paint because Tavern Green from The Old Fashioned Milk Paint Co. was the perfect shade of vintage green.

It’s been too hot to paint in the garage, so I’ve been getting creative in the kitchen.

I did not use the bonding agent when mixing my milk paint because I wanted a chippy look, as if these piece were decades old. I applied two coats to the stool and the chair.

Then, I used my Silhouette Cameo to create stencils of the Sinclair logo.

For the stool, I went with the straight logo, with no modifications. But for Jackson’s chair, I deleted the word Sinclair and enlarged the dinosaur. I also created a stencil of his name in a similar font.

Once I’d finished designing the stencils in my Silhouette software, I cut them out from vinyl and applied them to the stool and chair using transfer paper.

For the stool, I had to make two stencils, one for the lettering and another for the background.

Using transfer tape, I put the background stencil on first and painted it in Antique White paint from CeCe Caldwell’s. When I removed the vinyl and transfer tape, some of the milk paint chipped off, and I was just fine with that. Made it look even more vintage. Once the background was dry, I put on my second letter stencil and filled in the letters with Annie Sloan Chalk Paint in Emperor’s Silk.

Don’t you just love how the green paint chipped off?

I did a little more distressing with a sanding block and sandpaper and finished the piece with two coats of Briwax, buffed to a shine, to seal it.

For Jackson’s chair, I applied my stencil to the seat and painted in the white background. When the paint had dried some, but not completely, I removed the stencil and the vinyl mask to reveal the over-sized apatosaurus.

And I painted Jackson’s name on one of the slats in red.

If I had it to do over again, I may have kept the dinosaur its original size and substituted Jackson’s name for Sinclair in the logo. My painting second-guessing aside, Jackson loves his new dinosaur chair.

Linking up to the following parties: 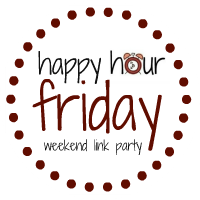