You never know when a seemingly inconsequential decision can become monumental.The choice of a left turn or a right turn can be lead you to places you never imagined.

Of course, Robert Frost said it much more eloquently than I did. And he probably had more important matters in mind than decorating and furniture when he wrote “The Road Not Taken.”

But it is precisely because of a road not taken that I found a treasure this weekend at an estate sale.

This empire sideboard is a piece of history, and now it will become a part of our family’s history. More on the provenance in a bit.

Let’s get back to the treasure hunt.

It’s probably extra sinful to admit this on the first day of Lent, but I have been coveting an Empire-style chest for a long while. But these beauties are hard to find in my neck of the woods, or oh-so-very expensive. This style has eluded me,. Yet, every time I visited  the web or Pinterest, there was the object of my desire.

Taunting. Teasing. So beautiful. So out of reach.

The winter has been long and bleak — in yard sale terms. It is not like in the warmer months, when yards bloom with spring flowers and a mix of junk and treasures. When it is 10, 20, 30 or even 40 degrees, people don’t have yard sales. They stay inside in front of their TVs and fireplaces and computers and complain about the weather.

We secondhand treasure hunters do the same. On Saturdays, we sleep late. We have a second cup of coffee. We linger over breakfast instead of rushing out the door at the crack of dawn with a travel mug, a granola bar and money we’ve scavenged from our husbands’ wallets and our kids’ piggy banks.

But not last Saturday. I bundled up in my winter coat and set out with my GPS and the newspaper classified section. There were just a few sales. Two in my zip code, two more clear across town, and a few more in the next county over. The ads all promised wondrous treasures, but I’ve learned to recognize hyperbole in newsprint.

I was not expecting much. Especially from the estate sale that I almost skipped in favor of a moving sale elsewhere in town.

As much as I love yard sales, I am not a fan of estate sales. Certainly, you can find treasures there, but the prices are typically much higher than I want to pay. I’m the kind of person who wants to pay $5 for a coffee table so I can brag about the bargain I got for the rest of my life.

But that was not the case at 810 Willowbrook Drive.

As soon as I walked in and saw the 10-cent cordial glasses, I knew this was going to be a different kind of estate sale.

Then I stepped into the dining room and spied …the sideboard.

It was breathtaking. Even though the doors were Scotch-taped together and all the knobs were loose.

And I couldn’t believe the price. Not $5, not even close. But so much less than I knew this stately piece of furniture was worth.

You probably can’t read the tag in my fuzzy cell phone photo, but the original price was $250.

Of course that’s not what I paid because I knew that on Sunday the sideboard would be discounted more — 25 percent during the first few hours of the sale and 50 percent after 1 p.m.

I asked the woman running the state sale if she would take less, but the original price was firm. I could place a bid, though, she said. And as long as it was more than Sunday’s 25 percent off price, I would have the chance to purchase it at the end of Saturday.

When my phone rang at 4 p.m. with news that I’d won the sideboard, I was giddy.

I never intended to keep the sideboard for myself.

I paint furniture, and I resell it. And I’m getting ready to open a second booth in an antique store, so I desperately need inventory. At more than 5 feet long and nearly as tall, the sideboard would take up a lot of floor space in my booth. And I think I could sell it for a nice profit.

But it already has a home. My home. The perfect spot just beside my chair in the keeping room.

I knew that as soon as it was loaded into our pickup truck and started imagining where it would fit.

As much as I love to transform and rejuvenate with paint, I do not plan to touch a paintbrush to this piece. The wood is too beautiful, the finish too rich, even though there are places where the veneer has been scarred and repaired. But I like those so-called imperfections. They speak to the sideboard’s character and its history.

And what a history this sideboard has.

It was originally part of the decor at a historic hotel in Salisbury, N.C., before it came to be owned by the Naval officer who lived at 810 Willowbrook.

I’m still trying to determine which hotel that was.

Either the Yadkin Hotel… 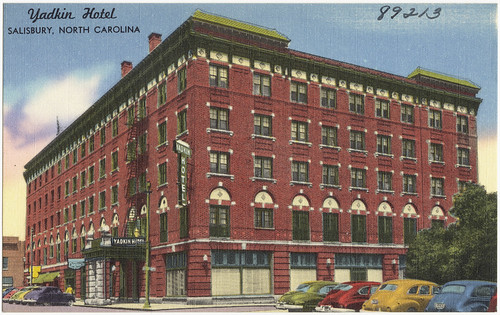 Or the Empire Hotel… 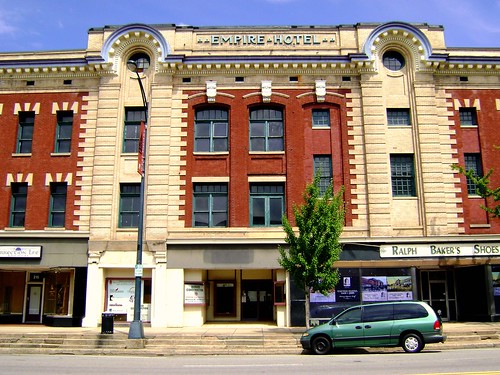 …which opened in 1859 as the Boyden Housea and closed in 1963. The hotel housed federal officers during the Civil War, and Robert E. Lee and his daughter once had breakfast there. The hotel also had a secret tunnel connecting to the Meroney Theatre across the street so actors could avoid crowds and bad weather as they made their way back to their rooms.

I trink a trip to Salisbury is in order so I can search the archives at the library and historical society in search of a photo from the hotel’s dining room where perhaps my sideboard lived.

I’m compelled to learn more about the history of this particular piece of furniture, so I can preserve it and pass it on.

In the meantime, we will make our own history with this piece. We will fill it with board games, Legos, iPads, iPhones and decorating books.

And fuss over how to accessorize the top.

After a conversation with my mother, I’ve realized I need a collection of antique barware and silver for the top of the sideboard. She is donating an old blue seltzer bottle to the cause, but now I am on the hunt for some hotel silver and perhaps a demijohn or two. A crystal ice bucket and a cocktail shaker would be nice additions. Those antlers would probably look good alongside some trophies or a loving cup.

Oh yes, this sideboard and me, we’re going to have some stories to tell. We’re going to make history — right here at home.

Linking up to the following parties: